In 1854, Thomas Graham Balfour, an army doctor in charge of a military orphanage, showed how treatment groups could be created to ensure that like would be compared with like. Balfour wanted to find out whether belladonna protected children from scarlet fever, as some people were claiming. So, ‘to avoid the imputation of selection’ as he put it, he allocated children alternately either to receive the drug, or not to receive it. [5]

The use of alternate allocation, or some other unbiased way of creating comparison groups, is a key feature of fair tests of treatments. It increases the likelihood that comparison groups will be similar, not just in terms of known and measured important factors, but also of unmeasured factors that may influence recovery from illness, and for which it is impossible to make statistical adjustments.

To achieve fair (unbiased) allocation to different treatments it is important that those who design fair tests ensure that clinicians and patients cannot know or predict what the next allocation will be. If they do know, they may be tempted, consciously or unconsciously, to choose particular treatments.

For example, if a doctor knows that the next patient scheduled to join a clinical trial is due to get a placebo (a sham treatment), she or he might discourage a more seriously ill patient from joining the trial and wait for a patient who was less ill. So even if an unbiased allocation schedule has been produced, unbiased allocation to treatment groups will only occur if upcoming allocations in the schedule are successfully concealed from those taking decisions about whether or not a patient will join a trial. In this way, no one will be able to tell which treatment is going to be allocated next, and tempted to depart from the unbiased allocation schedule. 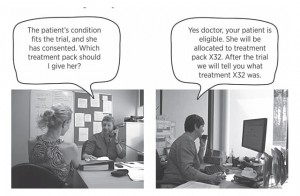 Allocation concealment is usually done by generating allocation schedules that are less predictable than simple alternation – for example, by basing allocation on random numbers – and by concealing the schedule.

Several methods are used to conceal allocation schedules. For example, random allocation can be assigned remotely – by telephone or computer – for a patient confirmed as eligible to participate in the study. Another way is to use a series of numbered envelopes, each containing an allocation – when a patient is eligible for a study, the next envelope in the series is opened to reveal what the allocation is. For this system to work, the envelopes have to be opaque so that doctors can’t ‘cheat’ by holding the envelope up to the light to see the allocation inside.

This approach is recognized today as a key feature of fair tests of treatments. Studies in which random numbers are used to allocate treatments are known as ‘randomized trials’.