Languages
Home > Read or listen to the book > Why are fair tests of treatments needed? > More is not necessarily better > Intensive treatments for breast cancer > Mutilating surgery

Until the middle of the 20th century, surgery was the main treatment for breast cancer. This was based on the belief that the cancer progressed in a slow and orderly manner, first spreading from the tumour in the breast to local lymph nodes, in the armpit, for example.

Consequently it was reasoned that the more radical and prompt the surgery for the tumour, the better the chance of halting the spread of the cancer. Treatment was by extensive ‘local’ surgery – that is, surgery on or near the breast. It may have been called local, but a radical mastectomy was anything but – it involved removing large areas of chest muscle and much lymph node tissue from the armpits as well as the breast itself.

The radical mastectomy, devised in the late 19th century by William Halsted, was the most commonly performed operation for breast cancer until the third quarter of the 20th century.

Nevertheless, some thoughtful breast cancer specialists noted that these increasingly mutilating operations did not seem to be having any impact on death rates from breast cancer. So, they put forward a different theory – that breast cancer, rather than spreading from the breast through the nearby lymph nodes, was in fact a systemic (that is, widespread) disease from the outset.

In other words, they reasoned that cancer cells must already be present elsewhere in the body at the time the breast lump was detected (see below). If so, they suggested, removal of the tumour with an adequate margin of normal tissue, plus a course of local radiotherapy, would be both kinder to the woman and might be as effective as radical surgery.

The introduction of ‘systemic therapies’ at about this time – that is, treatments that would deal with production or development of cancer cells elsewhere in the body – was also based on this new theory of breast cancer spread. As a direct result of this new way of thinking, doctors advocated more limited surgery known as lumpectomy – that is, removal of the tumour and a margin of surrounding normal tissue. Lumpectomy was followed by radiotherapy, and in some women by chemotherapy.

But supporters of lumpectomy encountered huge resistance to comparing the new approach with radical surgery. Some doctors believed very firmly in one or other approach and patients clamoured for one or other treatment. The result was a prolonged delay in producing the crucial evidence about the merits and harms of the proposed new treatment compared with the old.

In the mid-1950s, George Crile, an American surgeon, led the way by going public with his concerns about the ‘more is better’ approach. Believing that there was no other tactic to stir doctors into thinking critically, Crile appealed to them in an article in the popular Life magazine.[1] He hit the right note: the debate within the medical profession was now out in the open rather than confined to academic circles.

Then another US surgeon, Bernard Fisher, working together with colleagues in other specialties, devised a series of rigorous experiments to study the biology of cancer. Their results suggested that cancer cells could indeed travel widely through the bloodstream, even before the primary cancer was discovered. So, aggressive surgery made little sense if the cancer was already present elsewhere in the body.

Whereas Crile had used his clinical judgment to advocate and employ less radical local therapies, Fisher and a growing group of researchers collaborated in a more formal and rigorous approach. They sought to prove or disprove the value of radical surgery by the best-known unbiased (fair) method – randomized trials. They reasoned that by doing such studies the medical community and the general public might be convinced one way or the other. In 1971, the outspoken Fisher also declared that surgeons had an ethical and moral responsibility to test their theories by conducting such trials. And certainly, the 20-year follow-up of Fisher’s trials showed that – as measured by the risk of early death – no advantage could be demonstrated for radical mastectomy compared with lumpectomy followed by radiation therapy.[2]

“Randomisation is to minimise bias and ensure that the patients in each treatment group are as similar as possible in all known and unknown factors.”

Randomized trials were also done by researchers in other countries comparing breast-conserving therapy with radical mastectomy, for example by Hedley Atkins and colleagues in the UK in the early 1960s and later by Veronesi and colleagues in Italy. The overall picture confirmed Fisher’s results: that there was no evidence that radical mastectomy led to longer survival, even after 20 years of follow-up. [3] Other randomized trials, in Sweden and Italy as well as the UK and the USA, were done to compare many other forms of treatment – for example, radiation therapy after surgery compared with surgery alone, and short-term compared with long-term chemotherapies.

Overall, results from these early trials and from detailed laboratory studies supported the theory that breast cancer was indeed a systemic disease, with cancer cells spreading via the bloodstream before a breast lump was detectable. [4] Worldwide, more and more doctors became convinced by the mounting evidence that radical surgery was doing more harm than good. 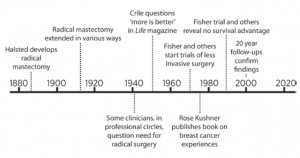 Challenging the ‘more is better’ approach in breast cancer surgery (click to enlarge).

And in the last decades of the 20th century attitudes of patients and the public began changing too. Spearheaded by the work of patient activists such as Rose Kushner in the USA and elsewhere, better informed patient groups came together from around the globe to challenge the ‘more is better’ approach to surgery and the medical paternalism that often went with it.

This widespread activity of both patients and health professionals effectively challenged the surgical excesses of the past almost everywhere. Incredibly, however, there are still some reports of unnecessary and mutilating breast surgery being done – for example, in 2003, over 150 radical breast operations were carried out in Japan. [5]

By 1985, the sheer volume of breast cancer trials on all aspects of treatment made it very difficult for people to keep sufficiently up to date with the results. To address this problem, Richard Peto and his colleagues in Oxford drew together all the trial findings in the first of a series of systematic reviews of all the information about all of the women who had participated in the many studies. [6] Systematic reviews of treatments for breast cancer are now updated and published regularly.[7, 8]