Languages
Home > Read or listen to the book > What can we do to improve tests of treatments? > So what makes for better healthcare? > Questions about translating research evidence into practice > 3: Statistics are confusing – should patients really have to look at the numbers?

3: Statistics are confusing – should patients really have to look at the numbers?

Download a pdf of Statistics are confusing – should patients really have to look at the numbers?

The way that numbers are presented can be very daunting – or even downright misleading. But if you really do want to compare one treatment with another, or to find out more about how the condition you have affects others like you, numbers always come into it somewhere. But some ways of presenting numbers are more helpful than others.

The best way to make the numbers mean something for lay people (and doctors too!) is to use frequencies. That means using whole numbers.So, saying 15 people out of a hundred is generally preferable to saying 15%.

Then it is often helpful to give the numbers not only in words but also in graphic form of some kind – for example, coloured bar charts; pie charts; pin men/ smiley and sad faces in boxes, etc; and also in tables. Presenting ‘numbers’ with these ‘decision aids’ means that as many people as possible can grasp what the data mean. 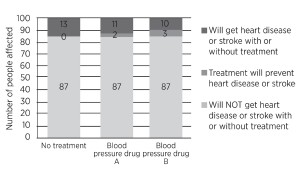 Here is one way of explaining the effect of blood pressure drugs on the risk of heart disease and stroke in patients with high blood pressure over a period of ten years, using a bar chart. [3]

Out of 100 people with high blood pressure not taking any treatment, in the next ten years, 13 would be expected to get heart disease or have a stroke.

That’s straightforward. Yet these simple numbers are often reported in terms only intelligible to statisticians.

Now let’s look at how the numbers work out using a table rather than a bar chart. In this example we will concentrate on the better treatment – drug B:

Let’s put the numbers into natural frequencies (simple counts) first, then work it through.

Don’t be fooled by eye-catching statistics 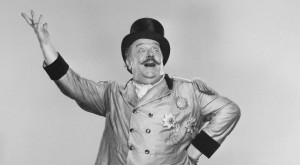 The relative risk reduction is always a high number – and sometimes a lot higher – and therefore is more attention grabbing. So if you see a headline saying ‘23% of strokes avoided’ it tells you nothing – because it does not state the specific group of people affected, the timespan, or, most importantly, the risk of stroke without any treatment. It is most likely to be the relative risk reduction (but you need to check).

The numbers are sometimes very different. Consider the way a newspaper reported a study of prostate cancer screening. ‘Could cut deaths by 20%’ sounds large. The results could also have been expressed as one death prevented per 1,410 people screened (or a minuscule 0.07%, that is, seven premature deaths prevented per ten thousand men screened). The 20% is the relative risk reduction, the 0.07% the absolute risk reduction. The latter is much smaller, because of the low rate of death from prostate cancer – and unlikely to have grabbed the headlines. The bottom line is that if a headline claim sounds overly optimistic it probably is! [4]

So numbers do matter, and presented well can help people make decisions. Patients should not hesitate to ask their doctor to explain results in a way that they can readily understand – with visual materials for clarity as necessary. If decisions about treatments are to be shared, both doctors and patients need to be clear about what the numbers actually mean.